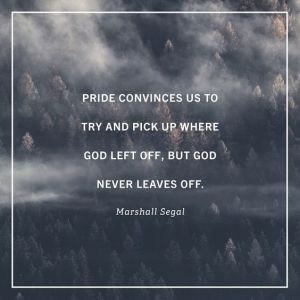 The Mad Dash for More

There have been seasons of my life when I ran hard “after God.”  But retrospect and the willingness to let my heart be sifted and searched before God have revealed a thing or two about the mad pursuit I was engaged in.

I think it is human tendency to  want to “help” ourselves, in essence taking ahold of what God begins to do in us and attempting to “help” it along.  We want to grow, we want to excel, we want to get the most out of everything.  We want to do better.  The desire for the fullness of what God intends is beautiful, but it becomes easily corrupted by the message of our culture and our broken human nature.  So, rather than wait for God to finish what He starts, we interfere.  We greedily reach for more and more and more of the things of God, in an attempt to get closer to God, and it’s encouraged because it seems right that if we are going to be greedy for something, let it be God – or at least growth in God.  I don’t think this is malicious.  Just misguided.

I think this way because I went that way.  I ran hard.  I reached for more…and more and more and more.  I greedily grasped for anything and everything I thought would lead me closer and help me to grow deeper in God. While I believe there are an endless supply of helpful tools available to the hungry Christian who is seeking to grow, the problem remains that they are just tools.  And while I believe it is important to grow and progress in God, the problem is that growth and progress too easily become the goals.  They too easily, in truth, become the gods we serve.  And the greedy grasping for more tools, more growth, and more progress sometimes does more damage than good.

Of course, I have a unique perspective granted, not by choice, but by grace.  In the middle of my hard run “for God,” God brought my run to a screeching halt and declared that there would be no more reaching, only resting, for me.  At that point, I didn’t know what resting meant.  And lying down was certainly not a part of my plans.  But lay down I did, because He made me.  With one touch of His hand, He made me to lie down in green pastures and observe the true nature of growth:  resting and waiting and trusting.

Long story short, I began to realize that all my greedy grasping for the things of God was really rooted in fear and pride:  fear that if I didn’t try hard enough, it wouldn’t happen, and pride that insisted I could do my part and somehow “help” God’s promises along.  I went to conferences, retreats, meetings, Bible School, joined internships, volunteered for outreaches, held nightwatches, and tried to grab ahold of any opportunity that came my way.  Sometimes, if I wanted it badly enough, I went out of my way to reach for it.  I don’t believe that any of those things were wrong in and of themselves.  They were great tools and wonderful opportunities.  But for all my greedy grasping, I found myself feeling more knowledgeable and yet more disillusioned than ever.  The walk of faith became complicated and burdensome for me, because I was pursuing what I thought it should be, or how I had interpreted what others told me about how it should be, rather than what God desired it should be for me.

This is really the bottom line, the dividing line, between greedy grasping and restful receiving: greedy grasping is driven by our own vision (which is often inspired by what we see in others’ experiences), and restful receiving is driven by God’s perfectly unfolding vision for us.  It might look different than it looks for our friends, or fellow church members.  We may not get the same opportunities.  We might appear to be receiving less outwardly (especially if we are Mommies entrusted with leading little ones, which comes with the sacrifice of many opportunities).  But restful receiving looks at the green pastures all around us and trusts that they are enough. They are exactly what we need right now.   Restful receiving does not look at the pastures of someone else’s territory and believe they might be better.  Restful receiving rests, and trusts that all we are meant to have, we have. Because restful receiving is in pursuit of God alone, not the “things of God,” and trusts that the things of God automatically come with the person of God.  And what we don’t need, He will wisely and lovingly prevent us from having.

Greedy grasping, I have found, is rooted in the spirit of religion.  But restful receiving is rooted in grace, the very power which saves and empowers us to live a full and godly life.  It doesn’t always make sense to our struggling hearts.  But it always makes sense to the soul, if we are willing to be led by God, into the places He would choose for us.  He restores the soul that rests in His leadership and provision.

Today, take a deep, restful breath and ask God to teach you the difference between greedy grasping and restful receiving.  Invite Him to lead you to the green pastures where you can rest and trust, where you can let go of everything that conflicts with His desires for you.  May you find, as you surrender to His wonderful plans, that your life becomes radically simple, and your faith becomes purer than it’s ever been.  He has more for us than we could ever want for ourselves…if we are only willing to receive it, in rest!

One thought on “Greedy Grasping vs. Restful Receiving”