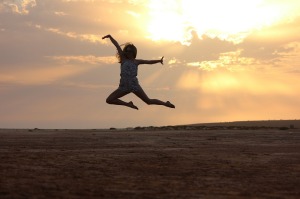 I’ve been pondering a lot lately on the stark difference between the life I have now and the life I had before I said yes to Jesus. There really is a remarkable difference. So much so that if my past were to be dug up and spread about, I would have some things to explain. But there is only one explanation, and that is the grace of God. He has changed everything for me and about me. I know that sounds extreme, and maybe even exaggerated, but it’s really an astounding truth that Scripture confirms should be the reality of our new life in Him.

When I stop and think about it, I can say with all honesty and sincerity that my life with God has been characterized by breakthrough. If it sounds boastful, let the boasting be about Him and what He’s done, because I am fully aware that I could never have achieved any of it if left to my own devices.

So what is the secret to such breakthrough? First, I think we have to realize that breakthrough is a lifestyle in Christ, not just a once in a while kind of thing. We were meant to ever and always move from glory to glory, from faith to faith. That means we are meant to continue growing and being transformed and becoming more and more like Him, experiencing more and more of all He is and all He came to do. Everything that keeps us from that is meant to be broken through. We are called overcomers for a reason.

Second, we have to come to the end of ourselves. Now, this is a term I am very familiar with, having grown up in a family with lots of people in recovery – or in need of recovery. Everyone in my family knows and will tell you that whenever someone is running amuck and making a mess of their lives and won’t heed the wisdom of the ones they love, they just have to “come to the end of themselves,” or “hit rock bottom” before any kind of change can occur.

But what exactly does that mean? Where on the map of our lives is rock bottom? It means that we finally come face to face with the truth that we can’t try hard enough to make it work. We look ourselves straight in the eye, acknowledge the mess we’ve made – and that we’ve made it – and stop pretending that we can fix it. It’s the point where we can say, without making anymore excuses, that nothing good lives in us, and that – despite the desire to do what’s right and good, we cannot. We need help.

That might sound like an awful place to land, but it’s really the best place in the world to get to, because it’s the launching pad for a life of breakthrough. It’s called rock bottom because it’s the place where you recognize your own insufficiency to do anything more or different than you’ve done, and you fall upon the Rock of Jesus. He loves to meet people in that dark place, because His light gets to shine without the distraction of our own need for recognition and praise, without the struggle of our own effort seeking to produce our own desired results.

For those with control issues, this is not appealing. But beyond the need for control (which enough mess can take you to), there is a wonderfully free place called surrender, where we get to experience something much greater than our own desires. We get to taste His desires for us, all of which are truly good.

When we fall upon the grace of God and surrender to the reality of our own inability to do anything good apart from Him, that becomes the intersection of our new life in Him – the life that was meant to be characterized by breakthrough. When He meets us in that low place, we get to see Him in all of His glory, being everything He promised He would be. We experience the power of His love and His grace as He transforms what we could not change about ourselves and our messy lives. And when we agree to stay there – surrendered to His grace and love and power, breakthrough becomes our lifestyle. And when breakthrough becomes a lifestyle, nothing else is desirable.

So how do we arrive at this place of deep and total surrender, so that we can step into a lifestyle of breakthrough? For some, it comes by way of deep brokenness. Sometimes life is so messy and so hard and so painful that it depletes us of any and all strength to keep going, and we fall into surrender because we have no other option. This is not the preferred method, but it works! And because the pain and mess have been so great, those who enter in this way don’t often want to leave. They are happy to step out of their old lives and grow in the new.

But I wonder often if we always have to go that route? Does it have to get all the way to rock bottom? Can’t we just choose sooner to live lives of breakthrough? Can we get to breakthrough before life breaks us?

My conviction is that we can. We can because there is a secret to breakthrough that also serves as a shortcut. It’s called the will of God, and we have access to it daily. Philippians 2:13 says that God is working in us both to will and to act for His good pleasure. That means He is working in us to give us the desire and the power to do what pleases Him. Before it gets to the point of no return, we can turn toward Him and lean into Him, and break through whatever obstacles are standing in the way.

To put this in picture form, I saw someone yesterday come to the altar, where a call went out to step into the life God called men and Fathers to lead. I knew this individual’s story, and his struggles. I knew that, while he was up there, his confession was weak. He wanted what he had just heard was possible and even expected, but I knew he knew that he had tried before and failed. I knew he knew that there was a good chance he would fail again. I could feel his hesitancy.

Someone else I knew once responded to an altar call where freedom from toxic relationships was being offered. It was what God wanted to do, the breakthrough He was bringing, and she needed it. She went up hesitant, but desperate, because she had tried everything already, and nothing had worked. Her only hope at that point was God, a power greater than herself.

As I watched my friend struggle within Himself yesterday, I couldn’t help but get excited, because he, too, was desperate – even while he was hesitant. He plainly saw the road he was on, and where it would lead. He knew he needed breakthrough. What I wanted to scream to him was that I know the secret: it’s not about him! It’s all about God and what He can and will do as we completely throw ourselves onto His mercy and strength.

It’s like a child who has walked too far at the zoo and must be carried. God is happy to pick us up where we can’t walk anymore, and get us to the destination He has planned. When we walk on our own, we often take detours, because we get distracted by all the other sights there are to see. When we are carried by God, we see the sights He has planned for us. We live lives characterized by breakthrough, because nothing can stand in His way or thwart His agenda.

It seems simple to me, on this side of knowing such a life. When I was on the other side, it was such a mystery. But the apostle Paul makes a statement that rings in my spirit today. He knew a life of breakthrough, too. In 2 Corinthians 3:5, in the Passion Translation, he writes:

“We carry this confidence in our hearts (the confidence of knowing God’s love was flowing through their lives to bring breakthrough to other people’s lives, too) because of our union with Christ before God. Yet we don’t see ourselves as capable enough to do anything in our own strength (some versions say “not that we are sufficient in ourselves to claim anything as coming from us), for our true competence flows from God’s empowering presence.”

The secret to breakthrough is this: I can’t, but He can. And so instead of hesitating, I press in and plow forward, trusting that He will move whatever is standing in front of me out of the way, or else He will lift me up and over it. He will help me, He will be the strength I don’t have (and no longer have to pretend I have). I can say yes to anything He asks of me or anything He offers me, because as I step into it by faith, He will fulfill His promise to make it happen. All I literally have to do is trust and obey.

That doesn’ t mean I don’t and you won’t encounter difficult things. We will most certainly face troubles of many kinds. But none of it can keep us from what He has destined us for. Instead, as we surrender to Him and move forward in His grace, as one song so eloquently states, “the wave that was meant to crush us will be the wave that will lift us higher.” (Amanda Cook)

Dear Woman of Breakthrough, dive into Jesus and don’t look back! Don’t let your past or your fears put boundaries on what He longs to do in and through you. He is enough! His grace is sufficient! Your yes is enough, if you allow it to be fueled by His power. He is so faithful, and life in Him only grows richer as you grow and experience all He has planned for you! May today be the day you decide that your life, too, will be characterized by breakthrough!

4 thoughts on “The Secret of Breakthrough”