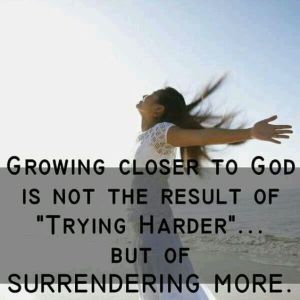 When I worship God, I often do so with my hands in the air, as a sign of surrender.  I do this because there is so much I wish I could control.  There is so much I want to change. There is so much I am always trying to hold onto.  Coming before God and throwing my hands in the air is my way of giving it all to Him.  It’s a physical gesture that has tremendous effects in the spiritual realm.  It encourages me to let go of the things I’m not even sure I think I can.  I trust, when I go before God this way, that He is strong enough to wrestle from my hands that which I think I still need.

And I want Him to.  Because I’ve learned, over and over again, that whatever I give to God is returned or replaced with something so much better.

Maybe you’ve seen the picture of Jesus and the little girl, with teddy bears?  Jesus is kneeling before her with His hand outstretched, asking for her little teddy bear.  She is clinging tightly to her little treasure, and doesn’t want to give it up.  Above the picture is a caption of their conversation.  Jesus is saying, “Trust Me,” and the little girl is arguing, “But I love it, God.” Behind Jesus’ back, in His other hand, is a much bigger bear.

We tend to trust the hand of God only when He comes to give.  When He comes with open hand to take something from us, we are always unaware of what He is holding in His other hand.  We fear what we will lose, but fail to see all we will gain.  And in this struggle, we often miss the richest blessings of God.  Because we fear the surrender of the little things we love, we never receive the bigger things that would bring an even bigger love.

To be sure, the things God asks us to surrender, to give up, don’t often feel like little things.  Sometimes they feel like the biggest, most important things – or people – in our world.  But I can tell you from experience that it is God’s nature to give.  So when He comes to take something from us, it is always because what we are holding onto is much less important than we have come to think it is.  And because He wants to give us the fullness of the thing we are imagining the little thing might be.

Many years ago, I had to surrender my marriage.  In my mind, it was everything.  But in God’s mind, it was just a shadow of the marriage He had waiting for me.  Letting go was hard.  It hurt, and I didn’t understand.  I didn’t see what God was holding in His other hand, then.  I didn’t believe that what I was losing could be returned.  And because of the hurt that came with the loss, I wasn’t sure I wanted it to be.

But years later, I realized the marriage I was clinging to was really an illusion.  The love I thought I had was not love at all.  And after many years of trusting, sifting, clearing and rebuilding, my husband and I are finally beginning to see the marriage that God had in mind when He asked for the one we had tried to build on our own.

I don’t know what God is asking from you, as you face your trials.  But I do know that He never extends His hand to take, without bringing a better gift in the other.  Choosing to praise God in the face of what feels like loss is to believe He has something more for you than you can yet see.

May you be encouraged to praise God today, with arms wide open, surrendering it all. God fills the hands that are empty.  And all His plans for you are full of a goodness you haven’t yet known!  Bring it all to Him, and dare to see what He gives you in return.  This is truly the adventurous life!