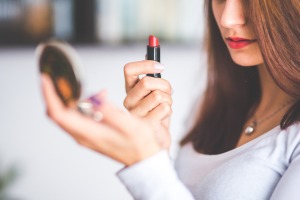 Last week, we talked about how things break sometimes. We also talked about how, when things break, hidden truths get exposed. It doesn’t always feel good when this happens, but it is good, because it gives us the opportunity to get real with ourselves, and with God. Freedom and breakthrough are packaged within such occasions, if we are brave enough to look into the mirror which peers into our souls.

The mirror was deeply magnifying for me last week, but the crowning moment came yesterday as God’s grace confronted my wobbly, “I’m still standing” smile.

I thought I was doing okay as I maneuvered through the broken things in my world. I had even been a bit vulnerable, allowing myself the room to be honest about my feelings and shedding some tears in the process. But God wanted more for me than just an emotional release from the built up pressure of living with broken things.

In all honesty, that’s our typical cycle as women: we just keep moving, just keep functioning the best we can when things are broken (it seems like there’s always something broken), until we have a breakdown. Then we feel a little bit better, so we get up and do the same thing all over again.

Partly I think we do this because we don’t know what else to do. We can’t fix much of what’s broken, so we figure that we have to learn to live with it. The example I heard yesterday was that of “jiggling” the port on a broken car battery every time the car wouldn’t start, rather than putting a new port on. This is survival mode, and I’m sure we’ve all been there more than once. Maybe in some things, it’s true that we must simply learn to endure, at least for a while. Sometimes we can’t afford a complete fix, in more ways than just financially. But if we aren’t careful, we will adopt the belief that survival is good enough – about everything, even the things we were never meant to just survive.

Such was the case with the broken part of me that got exposed yesterday. In His goodness, God spoke through an incredibly strong, yet deeply honest and vulnerable woman, and what she shared laid me bare. Suddenly, I realized that I have been doing my best to live with a brokenness that I figured might never be fixed. So, in order to adapt to that “reality,” I’ve settled with just covering it up (my version of “jiggling the port”).

It hasn’t been hard, because comparatively speaking, I don’t wear a ton of makeup. Just enough to present the face of a woman who cares. I’ve been able to hide behind my upbringing for years: My Grandma was the Avon lady, and she taught me early how to put on a good face. She was also of the stock of women who thought it shameful (and still does) to not get up and get dressed and make yourself presentable for the day – even if all you were going to do was sit at home. Yes, I learned to take a certain kind of pride in appearing “put together.”

But somewhere through the years, what may have started out innocent and even a bit healthy got polluted by the complicated relationship between external and internal messages that gave birth to toxic beliefs. I can’t break down the whole journey for you here, but suffice it to say that, for many years now, I have looked in the mirror and thought, “We’d better do something about this.” In other words, what I see in the mirror, I have deemed unacceptable…without the proper “fixing” of makeup.

It’s not really a makeup issue, though. I don’t have a problem with makeup. I don’t think it’s wrong to tastefully beautify ourselves. The issue God put His finger on yesterday was deeper than my skin. I have learned to treat it superficially, with something that covers up what I and the rest of the world sees. But when I broke out in a rash and rosacea on my face last week, the jig was up. What used to be manageable suddenly became magnified to the point where I had no choice but to admit there was a bigger problem than my reflection in the mirror.

Of course, I didn’t come right to that conclusion. The brokenness of my physical appearance, plus the brokenness of everything else I was facing at the same time, caused my soul to leak its deep, dark secrets again. I found myself pondering desperate measures to “fix” what had gone wrong. I became willing to spend money I didn’t have, to go on a wild goose hunt for products that would work – no matter how long it might take me. I even considered resigning from everything that required me to appear in public until I could get to the bottom of it!

I know, it sounds completely ridiculous and irrational. You can laugh if you want to (I am able to, now). But somewhere deep within me, there has been a root of insecurity that has finally been exposed. And attached to that insecurity is deep shame, because I know better. I fight this off of other women. I know we are more than what we look like. I hate the spirit of vanity and war against it every way I know how to. Yet, still, it has managed to mark me.

I don’t know how it got access to my heart (I have some ideas, but I suspect there is more than what I can see on my own). I definitely don’t want it there. And I’ve tried in vain, for years, to deflect attention from its wound. But God….! He has seen my willingness to “live with it,” my constant attempts to slap some paint on it and call it better. And He has faithfully stepped in, like an expert surgeon, to remind me that He didn’t create me to carry this. He didn’t create me to be defined at all by my physical appearance. Before I was marked by insecurity, I was marked by His love and adoration. And so He has come with His tools to heal that broken place in my heart.

Will I still “put on my face,” as my Grandmother says? In all likelihood, I will still wear makeup, but not because I have to. Beneath the made up face, I will no longer be entrapped like a hopeless prisoner, resigned to her fate of riding out the time she has been sentenced to. Instead, I will be in a process of deep renewal and beautification that goes far beneath the surface of the skin that you can see. And I will be carrying hope, not desperation, because I know that God has come to liberate me from all that life and broken love have spoken over me.

Dear Woman of Breakthrough, maybe you’re not insecure about your beauty (or maybe you are?). Maybe your insecurity falls within other lines. But somewhere, deep within your soul, is there a place you’ve learned to just cope with, instead of allowing God to permanently fix it? If we knew the furious love of our Maker, and that He is a Healer and a Giver of life and deep confidence, we would ask for what we’ve maybe learned to give up hoping for. And we would experience a deeper satisfaction than we could imagine.

What if today could be the day when Jesus comes to meet you at the well, and gives you water that will cause your soul to never thirst again? What if today could be the day when He silences a need that has been crying out of your soul for years? What if He would put His finger on a place in your heart today that you have hidden from all the world? His presence draws us out of shame and hiding, and into His grace, where the light of His love floods every ounce of who we are. He changes everything…when we let Him.

May you find the courage today to look a little closer at your broken things, searching for the opportunities hidden there for your next breakthrough! When you can’t see past the surface, you can be sure that God holds the mirror that reflects the depths of your soul, and He is waiting for you to see the truth. The truth, dear ones, is what will set us free.