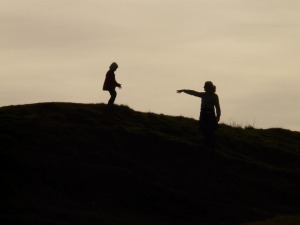 As women, we have received a high calling. From the dawning of creation, we were crowned with an identity which births victory. Whether we become literal, biological mothers or not, we are, by God-given nature, life-givers. That calls my attention because it implies that, whatever I do, if it is to be truly effective and successful, it must lend itself to passing on whatever it is which I possess.

It also speaks to me because I was once the woman who wanted no children, and who thought I was completely unqualified to pass on anything of substantial value. Based on the story I carried, I was the girl who couldn’t see past my own wreckage, and had settled for the lie that my lot in life was just to survive, while trying my best to be content with whatever landed in my path.

On this side of His interruption, what I just shared seems ludicrous at best! Now that my eyes have been opened to see beyond what I could see then, I understand that God created me – He created us, as women – to be weapon-bearers in His mighty hands. Ours is a purpose so terrifyingly great that we need His intervention in order to be able to walk in it.

Enter the Grace of God.

In the beginning, when God created woman, she stumbled quickly out of the path which God had ordained for her. But in His mercy, He redeemed her just as quickly, and pronounced a purpose over her life which would, if embraced, keep her intimately connected to Him and to His perfect plans for the world. Those plans would necessitate her willing involvement, and her vulnerable dependency upon her Maker.

Enter the Partnership of God.

As Eve humbly faced her own failure to walk as she was created to walk, God blessed her to bear children who would bear His image. The image-bearers she carried, carried the destiny of rising to defeat the authority of the enemy who deceived Eve into trading her God-given identity for one rooted in less than she was meant to wear. As she submitted herself to God’s mysterious plans, pouring herself into sons and daughters full of promise, God would do the unthinkable: redeem her brokenness, and rescue the world from the same.

Enter your place in the story.

As I said before, you don’t have to be a biological mother to have a place in the story of God’s redeeming love. Mothering is a part of your nature as a woman, whether your womb conceives or not. You and I, as women created with a purpose, carry life in the womb of our spirit, and that life is destined to pour into someone fashioned for their own purpose. It’s part of how God has wired everything, to connect in ways which we sometimes discover just by being who we are. Nurturing is part of our make-up. Momma-bearing comes naturally to us, even those of us (like me) who might think it doesn’t. When God steps in and begins to have His way in our lives, He draws out what we often don’t even know is present within us, because He put it there.

I tell you all of this because, as I’ve answered the call to spend the first hour of my week in prayer for mothers and children, God has met me there with promise. Where I often feel like I’m bumbling my way through this motherhood thing, He persists in showing me that He has put guardrails around my bumbling and stumbling path. Where I remind Him daily that I’m still not sure I was created for this particular calling, and that there are plenty of other women who are much better at it than me, He consistently reassures me that He gave me the children I now have, and that He is fully invested in this journey of my calling to raise them up according to the way they should go, the way which only He knows.

Some of these children are not “mine,” per say. That’s why I can say what I’ve said about being women of purpose who pass on what we possess, even if we’re not biological mothers. Before I had my own children, God assigned me to love other women’s children. Before I was convinced that it was a part of my identity, He placed babies in my path who were in danger of being devoured by life in a world that had left them unprotected. He stirred a burden in my heart that I couldn’t chase away, and through that journey, He has awakened me to a calling I would have never guessed I had.

So, while I set out to pray for my children now daily, I inevitably find myself praying for and considering all children, and all mothers – all women, because we are connected through this crazy, larger-than-life purpose. And because this purpose brings us closer to God than most things in life ever will, if we’re willing to embrace it.

Daily, the news projects reports about the systems that are shaping our world, the world which we will one day leave behind. But also the world which our children, and the children of the women all around us, will inherit. If we are willing to let God awaken us, and move us away from the mind-numbing distractions, we will hear a call to action. We will hear the next generation’s chains being forged in the crucible of cultural wars we can’t afford to be uninvolved in. Now is the time for women to arise and pledge themselves in service to save the lives of those who are destined to defeat the devourer of hope and promise.

Though I pray daily for God to lead me as I lead my children, the truth is that I don’t know where I’m going – much less where they are supposed to go. I often feel blind in this endeavor of raising kids. Motherhood (or mentoring, if that is your destined path), is a trust walk. But as we take up the arrows which God brings to our quiver, He is faithful to place His hands on ours, steadying our aim, and reminding us that He has promised victory. He has embedded it into our wombs. The lives entrusted to us in the journey of motherhood (or mentoring, or both) are lives knit together with promise and purpose. If we will faithfully pick them up and aim them confidently in the direction of His dreams for their lives, He will see to it that they hit the mark.

The imagery I am using is drawn from the book of 2 Kings, chapter 13, which tells the story of a King who visited a man of God when he was surrounded by an enemy. The man of God reassured him that God was with him by placing his hands over the King’s hands as he instructed him to pick up his bow and arrow and shoot it out the window facing eastward. In those days, this was a symbolic act which signified that the King was declaring war on his enemy. The hands of the prophet over the King’s hands signified that it was God’s will to wage the war, and that God was promising to help him obtain victory in the battle.

Most people, when talking about this story, focus on the failure of the King to shoot all of the arrows in his quiver, and the prophet’s pronouncement that, because he shot only a few instead of all the arrows at his disposal, his victory would only be partial. I think there is value in heeding the warning to use all that God places in our hands. Arrows in Scripture are sometimes used to describe children, and so it is also a picture which pertains to our discussion today. As women, it is important to recognize the potential of every child God gives to us, whether biological or not. Each one is filled with promise and purpose, and needs to be aimed in the God-given direction for their lives. This is part of our purpose.

But I think there is a greater focus for us in this passage today. That focus leans into the promise of God’s guidance and help. It hearkens to the declaration of war on an invading enemy, which God Himself leads us to make. It rests confidently in the assurance that, though we may not have a clue what this journey will or should look like as we walk it out, He will be with us, and He will secure the victory He has promised. All we have to do is be faithful in aiming and sending the sons and daughters He brings our way.

Dear Woman of Breakthrough, no matter your age, or the stage of life that you’re in, there is someone around you who needs what you possess. Even if you feel like you’ve lost your edge, or yourself, God is able to redeem whatever brokenness has blinded you to the purpose He created you for. He is able to raise you up again, or maybe even for the first time, and position you to pour your life into preparing others for their purpose in life. By doing so, your own purpose comes alive, and the connection God created us for completes something in us that we often don’t even realize is incomplete.

May you be freshly blessed and inspired to step into your God-given purpose today, to give life to those around you. Whether it is for a season or for a moment, pass on what you possess, and trust God to do whatever He has purposed to with it. May it be said of you and I, of us together, that we lived our purpose, that we shot every arrow placed in our hands, and that lives were redeemed by the power and promise of God because of it!